skip to main | skip to sidebar

And I haven't posted anything for a very simple reason: I have done damned near nothing with anything Warhammer-y.

Oh, and whatever I have done is over on my new(er) blog, The Scattergun Gamer.

"I've got eleven items in my Basket of Sorrow, cutting to the front of the line in the '10 or Less' lane - but my eleventh item is Emperor Pillsbury's Crown of Extra Golden Flaky Awesomeness, so I can get away with it. Cower before me and wait in the queue like all the regular people."
"Ah, but in the new Weekly Codex Circular, they got rid of the Emperor's Crown and replaced it with the Too-Tight Spandex of Garish Blindey-ness. MY army (which was totally re-vamped in the WCC) includes two units of Greenback-bearing Migrant Workers, which cost only 2 points each but have M4 (6 when running from ICE), WS5, BS100%, S8, T7, W2, A1, and Ld2. They should easily destroy your unit of Imperial Mega Super Wonderknights, with their measly 1+ Ward save. They are led by ACLU the Mighty, with the ACORN of Mischief. Your puny pre-painted collectible army is doomed! DOOMED!"

Wal-Hammer Fantasy Discount Battle Superstore
Coming in April 2010 to everywhere you look, next to the Starbuck's that is already there.
Games Bilkshop
11.99 Metal Infantry Mini Street
Gimme-Your-Dough, Willingly, YUK
Posted by J Womack, Esq. at 12:42 AM 1 comment:

This Blog is Moving!

As of this post, I am going to be moving all my Warhammer blogging to a new blog that combines my other gaming interests in one massive huge glorious stew.

The Scattergun Gamer is the new blog.

I will eventually probably delete this blog, but not for at least 90 days. The combined blog is something of an experiment. Call it a 90-day free trial period, if you like. 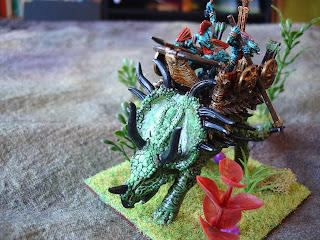 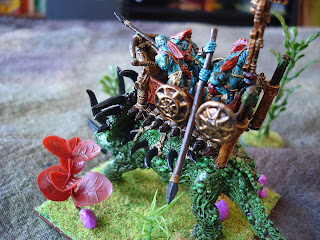 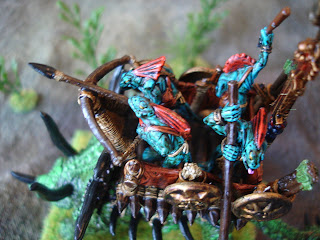 So the Stegadon is done. Mark that off the goals list for this month. I ahve been doing really well on the list for my VSF forces this month, but need to concentrate more on the WarHemorrhage side of the coin. I have been distracted by demands for BattleMechs, as well, and painted two of them so far this month (an old Phoenix Hawk and a Panther, if you care.) Here's the Panther: 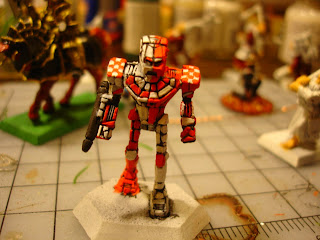 Note the Talabheim color scheme - not an accident!
Posted by J Womack, Esq. at 9:20 PM 2 comments:

I won five packs of these for $25! They should arrive in the next week or so. Not too shabby, I think.
Quick update:
I've been busy working on terrain as well. I have some new rock outcroppings and cliffs that are nearly finished. Also, I found some apple trees on clearance at Hobby Lobby, so there is a four tree orchard on the way. Finally, I have been working on a new canvas mat for the table top, suitable for Empire battles. Sadly, I really messed up on the first one. It will be transformed into a Martian landscape. The second one looks better, but is too dark - more like a jungle than European fields and such. Fine for Lustria and Venus, but not what I wanted for the Empire. So try number three is coming up in the next month or so.
Finally, I have nearly finished the Lizardman Stegadon (old metal version). The crew just needs a little touch-up and then to be glued in place in the howdah.
No work on Empire. Well, almost none. I started the last six flagellants. So far, just the flesh has been painted. Like I said, not much. I got a new pot of paint to help vary the dark reds of their robes.
Next week is Spring Break. I hope to get a lot of painting done
Posted by J Womack, Esq. at 9:19 AM No comments:

Wow... been almost a week since I last posted here. First month postings were pretty good, though. Hopefully March will live up to February's start. One can always hope.
So the poll. Obviously, more people thought winged lancers were the way to go. Personally, I was hoping for both. One thing I do not like is the winged lancer champion. Maybe I will do a weapon swap on him - its the mace I primarily do not like. Yes, I know a mace is a very effective weapon, especially against heavy armor. Don't care - I don't like them. So maybe a sword or lance. Anyway, I have decided I want both, and have already gotten 9 horse archers. Still need a musician for them (did they make one? I have to check my old Empire book).
Purchasing wise, I have got to slow down. First of all, I have tons of stuff now, waiting to paint (more on that in a moment). Second... I am running out of money! So, other than a little bit of stuff on eBay, and a private deal kinda in the works, I am done buying for the next few months. Yeah, right!
Painting goals for this month:
More later.
Posted by J Womack, Esq. at 12:36 PM 1 comment:

The quiet town of Blood Shed, Arizona. The townsfolk have scattered, and only the gunmen remain. 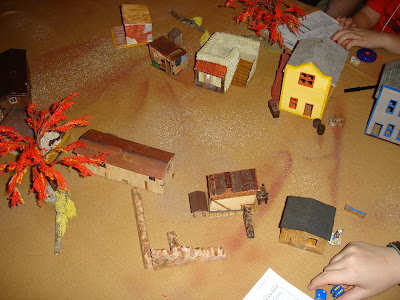 "I have you now!" exclaims gambler Augustus Macrae, as he stealthily approaches his first unsuspecting victim. "Click!" said the shotgun moments later. 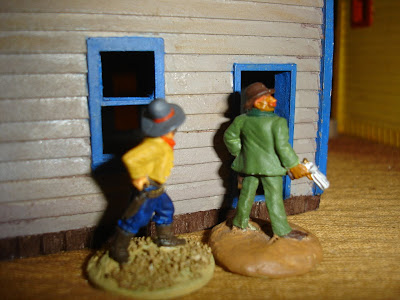 A powder monkey in the trees of Blood Shed. 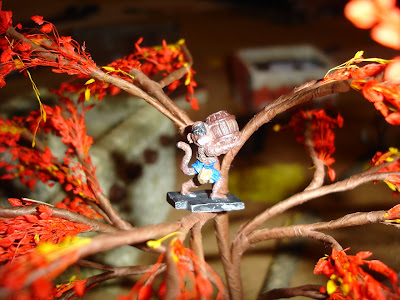 The End of Macrae. Blasted into the next world by his son. In a bowler hat! The indignity of it all! 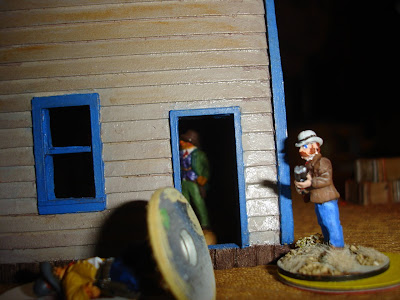 These photos were fun to take, but even more fun to play. Yup, I died. Again. But still, it was a good time.

The Damage So Far...

What Are You Looking For?